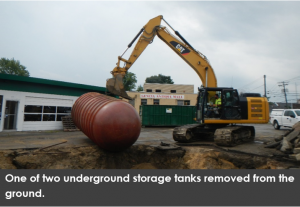 What do you do with an eyesore situated in the heart of your small community: an old, abandoned gas station? Well, Amanda White, the City of Geneva’s Zoning Administrator, was faced with that exact situation. With help of an Ohio Development Service Agency’s (ODSA) Abandoned Gas Station Cleanup Grant, the property’s underground storage tanks were removed, and the site will be cleaned up, redeveloped, and transformed into a bicycle rental and repair station to serve Geneva’s paths and trails. But that’s only half of the story because Amanda was determined the property should not just serve the community, but should become a rallying point and a source of pride for all to see. 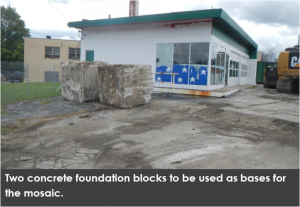 Pulling storage tanks from the ground is normally a rather mundane affair, but not to Amanda. Though early plans were to convert the property into a bike repair station, Amanda looked out for ways to make it a special place. When the two large concrete blocks were excavated from the foundations of the former gas pump islands during the tank removal process, Amanda thought of the idea to repurpose the blocks on the site and have them be the center piece for mosaic artwork at the bike rental and repair station. Geneva Public Library staff liked the idea and decided to partner, donating space and coordinating volunteers. The mosaics, designed by a Cincinnati artist and to be produced by students at the nearby middle school, will greatly enhance the property’s aesthetics. Goodbye, dilapidated property. Hello, innovative community art! 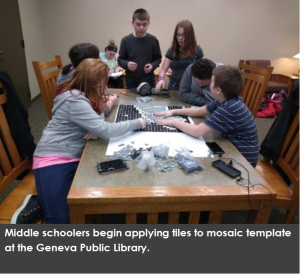 Other partners of the project include the Ashtabula County District Library and GT Environmental, Inc. GT assisted with preparing the necessary applications to ODSA and leveraged its expertise to conduct the environmental assessments and remediation. GT was pleased to donate funds necessary to purchase the tiles and materials for the mosaic of this community-based art project. The Star Beacon wrote a nice article discussing the project in more detail. Congratulations to Amanda White, the City of Geneva, and the students and community of Geneva.