Congratulations to NCO Solid Waste District and the City of Marysville 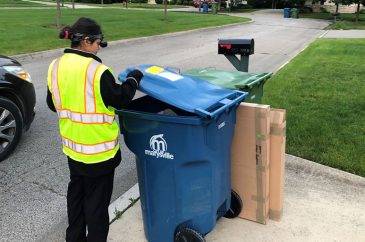 Congratulations to our client the North Central Ohio Solid Waste District (NCO) and the City of Marysville (City) for being awarded the National Recycling Coalition’s Outstanding Outreach Award for 2019! NCO and the City won their award for implementing the City of Marysville’s recycling cart tagging program. This program proved successful in educating residents about items that are not allowed in the recycling cart. The program was operated by two local interns from University of Findlay and the Ohio State University who worked Tuesday-Friday for nine weeks checking and auditing residential recycling carts. If a recycling cart contained common contaminants, the intern placed an “oops” tag on the cart notifying the resident what item was considered contamination.

During the week before the recycling cart audit began, a letter was sent out to all residents to inform them of the beginning of the project and outlined the importance of reading the tags if left on their recycling carts. The cart tagging audit then began its first round of tagging. Each round consisted of auditing twelve different routes in the City and took three weeks to complete (four routes were completed per week).

In addition to the pre-audit letter and the cart tags, a “top issue” postcard was sent to all residents to educate them on which problematic material was the most prevalent in the community after the second round of audits and before the third round of audits. It also served as a reminder of the tagging program being conducted. The postcard included information on keeping plastic bags, bagged recyclables, and unacceptable plastic resins out of the recycling bin. It is important and necessary during educational programs to repeat common themes in order to educate the public. This postcard, along with the cart tags, pre-audit letter, and face-to-face engagement with residents at their households served as constant reminders of the information being taught.

GT assisted NCO with hiring and training the interns, managing the pre- and post-audit waste characterizations, creating educational media, consolidating data, and providing a final presentation to stakeholders. Jim Skora from GT also flew to New Orleans to represent NCO and the City of Marysville in receiving the award.