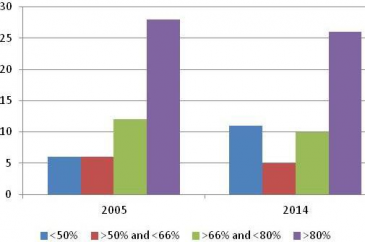 In the 2001 update to the State Plan, the residential/commercial goal remained the same for SWMDs, but the industrial goal was increased to 66 percent and an overall statewide goal was added: 50 percent reduction/recycling by 2005. The latest State Plan revision which was adopted in 2009, made no changes to the numerical reduction/recycling goals.

The recycling data collected by SWMDs and submitted to Ohio EPA each year is graphically depicted in Figure 1 for 2005 through 2014. As a state, Ohio has not yet met the 50 percent recycling goal for both residential/commercial (R/C) plus industrial waste established in the 2001 State Plan. Statewide industrial recycling is also less than the industrial goal of 66 percent set for SWMDs. In fact, the industrial percentage has actually decreased since 2005 even though the tons of industrial waste recycled has increased slightly during the last ten years. It is interesting to note that the statewide industrial recycling percentage in 2014 becomes approximately 59 percent if coal combustion wastes from power plants are eliminated from the calculations. 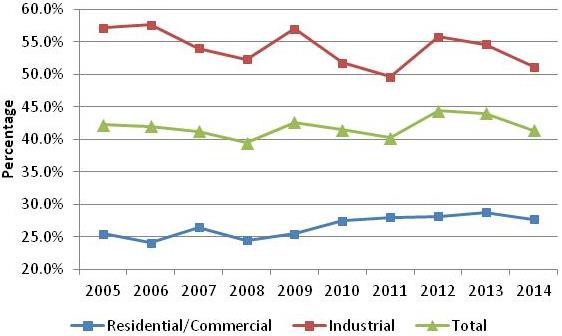 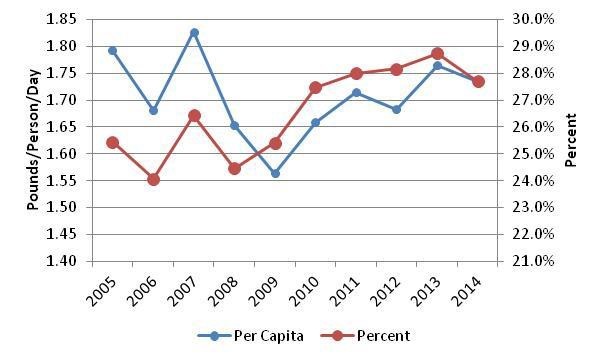 How does Ohio’s R/C recycling compare to some of the surrounding states? Based upon 2008 data from a BioCycle Magazine survey for these selected states, Table 1 shows that Ohio is in the upper range for both percentage and per capita recycling rates. (It is important to note that other states do not necessarily track and report recycling data in same manner as Ohio, so the recycling rates may not be completely comparable. However, this information is useful to provide a general measure of Ohio’s recycling efforts relative to other states.)

What Types of Materials Are Recycled in Ohio?

For the R/C sector, the largest single category of recycled material is yard waste. (Yard waste is normally diverted from disposal by composting, and for purposes of this article, is included as recycling.) Based upon 2014, yard waste comprised 33 percent of the total R/C recycling, while corrugated cardboard was the next highest category at 18 percent. (See Figure 3.) 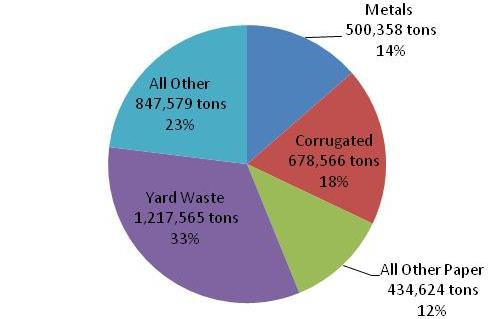 Of these selected materials, corrugated cardboard is the only recycled material from the R/C sector which increased from 2005 to 2014 (an increase of 32 percent). The amount of recycled metals, yard waste, and other paper decreased during this time period by 12 to 17 percent. However, each of the materials exhibited considerable variability in terms of tons recycled throughout the ten-year period. As an example, Figure 4 shows that the tons of corrugated recycled reached its peak in 2007, the lowest level a year later (economic recession), and has been mostly on an upward trajectory since then, with some relatively minor decreases. Figure 4 also includes the average annual price for recycled corrugated boxes for the Midwest region of the United States. It is interesting to note that the price of recovered corrugated has not always been an accurate predictor of the trend for tons of corrugated recycled. 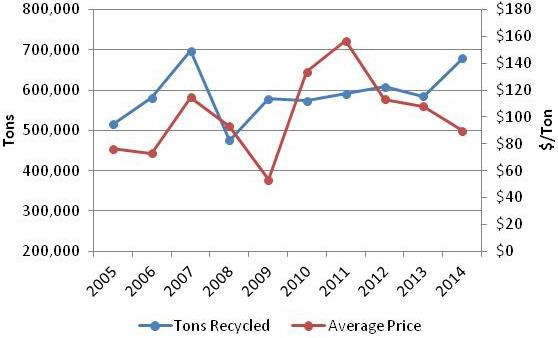 As shown above in Figure 2, the overall statewide recycling rate per capita for Ohio in 2014 was approximately 1.7 PPD. Consistent with the discussion in two previous paragraphs, yard waste and corrugated cardboard, and metals are the largest contributors towards the total PPD recycling rate. Table 2 shows the recycling rates in PPD for a number of the most commonly recycled materials in the R/C sector. 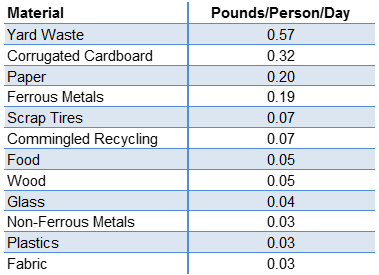 How successful is Ohio in terms of recycling the amount of materials which are available for recycling in the R/C waste stream? In order to provide an answer to this question, U.S. EPA’s percentages for primary material types representing the composition of municipal solid waste (or residential/commercial waste) were multiplied by the Ohio statewide generation total for 2014. Next, these estimates of the amount of material available for recycling were then divided into the amounts actually recycled in 2014. Figure 5, which illustrates the results of these calculations, shows that the recovery (or diversion) of yard waste is most successful at nearly 70 percent while metals and paper & paperboard (including corrugated) are at approximately 42 and 31 percent, respectively. (It is possible that materials resulting from construction and demolition activities have been included in the totals tons recycled, especially for metals, since many SWMDs incorporate tonnages reported by scrap yards and scrap metal dealers.) This figure also shows that Ohio has been less successful recycling the available food waste and plastics in the waste stream, and suggests that opportunity may exist to increase recycling of these materials.

While the foregoing assessment is helpful, it is important to acknowledge at least two qualifiers:

1.    Increasing recycling or recovery of any material will probably require more effort per unit recycled than the amounts that are currently recycled; and

2.     Using national composition percentages to estimate the tons of material available for recycling in the waste stream does not account for contamination from other wastes when materials are not source-separated.

Figure 5. Ohio Statewide Recycling by Material as a Percent of Material Available: 2014 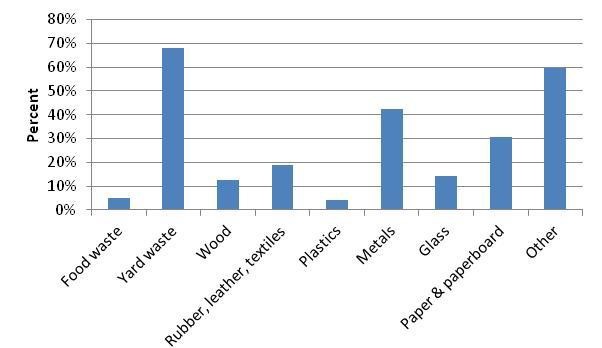 In the industrial sector, “metals” is the single largest category of material recycled, with other individual materials comprising much lower percentages of the total amount recycled. The “All Other” category combines a number of material types, none of which are large contributors individually.

Figure 6. Materials Recycled from the Industrial Sector in Ohio: 2014 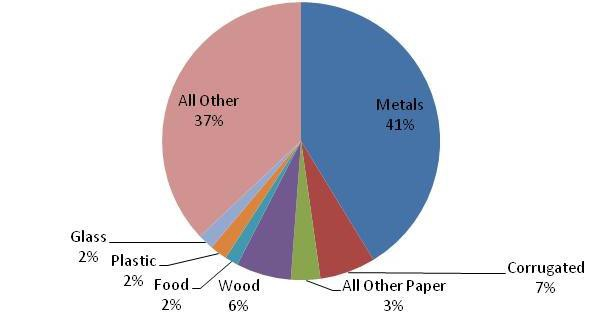 The amount of metals recycled from industries during the ten-year period from 2005 through 2014 reached its highest level in 2008, and has been substantially lower since then. Although the economy has rebounded since 2009 and manufacturing employment has improved as well, the number employed in manufacturing remains much lower than the totals for both January 2005 and January 2008. Not unexpectedly, the trend in metals recycling seems to follow the trend in manufacturing employment. 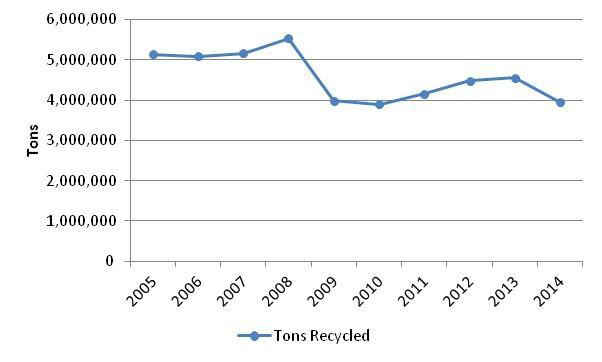 For example, as six SWMDs were added to the 15 to 25 percent category during 2008, the 25 to 35 percent category experienced a loss of five SWMDs. In 2014, three districts still reported recycling rates less than 10 percent.

Figure 8. Number of SWMDs by Category of R/C Recycling Percentage 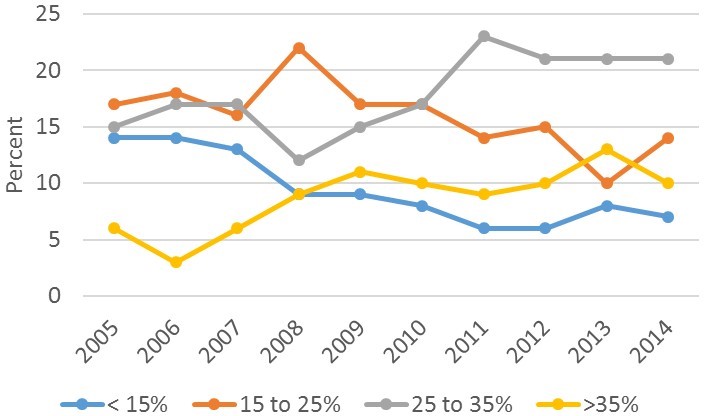 In general, mostly rural SWMDs tend to be distributed throughout the range of recycling percentages (i.e., low, mid-, and high range), while highly urbanized districts reported R/C recycling rates more in the mid-range. Table 3 shows the ten SWMDs with the highest reported percentage recycling rates for both 2005 and 2014. The majority of these districts are considered predominately rural in nature, especially those listed for 2014. 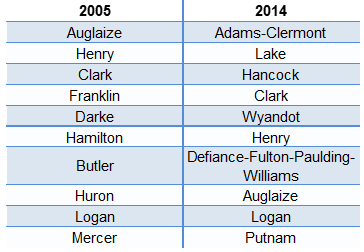 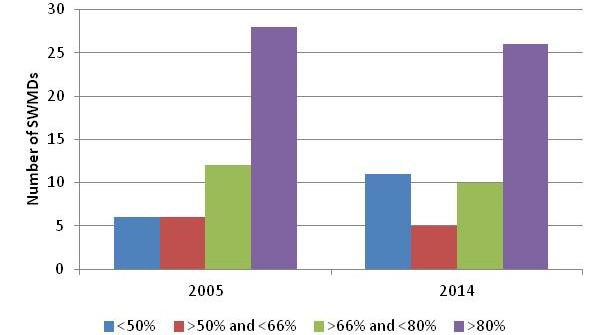 Although there has been some fluctuation since 2005, the three categories for recycling rates above 50 percent have generally included more than 90 percent of the total industrial tons recycled in a given year.

Where do we go from here?

Based upon the last ten years, statewide recycling in Ohio has remained relatively flat. In the R/C sector, percentage recycling increased from 2005 to 2014, but the actual tons recycled decreased slightly. The statewide industrial recycling percentage decreased during the ten-year period, at least in part due to the inclusion of coal combustion wastes. The goals for recycling set forth in State Solid Waste Plans have been achieved at the statewide level. However, many SWMDs do not yet meet the goals or targets established for solid waste districts. In 2014, twenty-one solid waste districts reported R/C recycling rates less than 25 percent, and sixteen districts

recycled industrial waste at levels less than 66 percent. One of the other conclusions from this analysis is that solid waste districts rely heavily on the recovery of yard waste and metals to achieve high recycling rates.

Where do we go from here? How can Ohio and the 52 solid waste districts move forward over the next ten to twenty years towards better solid waste management? If we focus on the statutory mandate to “reduce reliance on landfills,” it seems clear that the next update to Ohio’s State Plan should include policies requiring an increase in recycling rates and the tons recycled. (Statewide, Ohio has reduced reliance on landfills over the last ten years, as demonstrated in our January 2016 article on disposal. But reduced disposal has not been the result of greater recycling.)

The data also suggests that perhaps new approaches or materials should be emphasized to a greater extent into the future by solid waste districts. Many SWMDs have operated well-run recycling programs for years, but have been unable to achieve a 25 percent R/C recycling rate. Have these districts recovered as much yard waste as possible from the waste stream? Is metals recycling as successful as it is in some of the districts with high recycling rates? Perhaps it is time for the State Plan to include requirements for materials such as food waste, which comprises a substantial portion of the waste stream, but in 2014 made up less than three percent of the total R/C tons recycled. In addition, Ohio could require solid waste districts to begin including zero waste planning (ZWP) at the local level. Although ZWP does not have a long history, the promise of these plans is exciting.

The characterization of the sectors of solid waste generators is also an area of concern. By combining the residential sector with the commercial sector, then having the industrial sector standalone provides for ample opportunities for solid waste to be misclassified, and thus skew the data. Examples of this include normal commercial style collection routes that service industrial facilities with front load packer trucks. This data is typically called commercial when industrial waste is clearly included in the data. By separating residential waste from commercial and industrial or by combining commercial and industrial together, more accurate generation data including disposal and recycling will provide solid waste planners and districts with the information they need to properly plan for the future needs of the State of Ohio.

And finally, a discussion of recycling in Ohio would probably be remiss without acknowledging the possible shortcomings of data collection. Variability in tonnages from year to year and among SWMDs can be explained in part due to: 1) the fact that reporting by commercial and industrial companies is voluntary; 2) not all SWMDs conduct annual surveys; and 3) resources expended across SWMDs for data collection is not uniform. Ohio EPA has taken steps to address data collection issues, and it may be helpful to explore policies or approaches which could improve the Ohio’s recycling data even further.

There’s much to think about with regard to the future of solid waste management in Ohio. We encourage the Materials Management Advisory Council to consider the above suggestions as existing policies are reviewed and new ones are contemplated.

Click here for a printer-friendly version of this article.

For additional information, contact Mike McCullough at (614) 794-3570 ext. 13, or mmccullough@gtenvironmental.com.