In 2016, GT published on its website an analysis of solid waste disposal and recycling in Ohio based upon ten years of data – 2005 through 2014.  Data for 2015 has been available for several months, and we have reviewed this data looking for any changes in the management of solid waste in Ohio.   A summary of that review follows below. 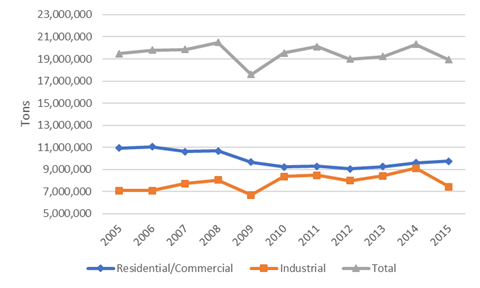 Disposal from the residential/commercial (R/C) sector continued a steady increase in tonnage during 2015.  Since 2012 (the lowest amount of R/C disposal over the last eleven years), disposal has increased approximately 700,000 tons.  The R/C disposal rate in terms of pounds/person/day (PPD) has also increased since 2012.  (See Figure 2.)  However, the percent change in the disposal rate (6.9 percent) has been slightly less than the comparable measure for the tonnage disposed (7.7 percent) over this four-year period. 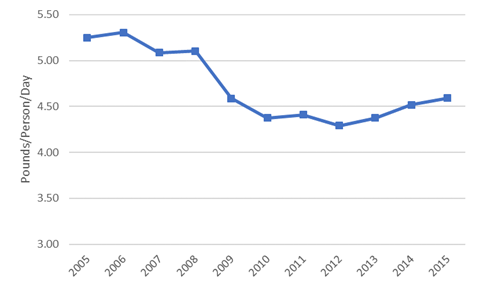 For the industrial sector, it is also interesting to compare the tons disposed (without the inclusion of coal combustion wastes) to manufacturing employment.  Even though Figure 3 is based on only four years, it does suggest that tons disposed from industry is closely related to the number of employees in manufacturing.  This information is potentially useful for SWMDs trying to accurately project waste disposal from their industries. 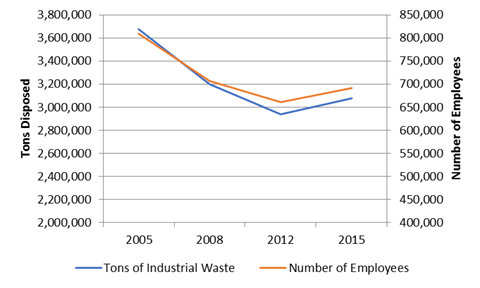 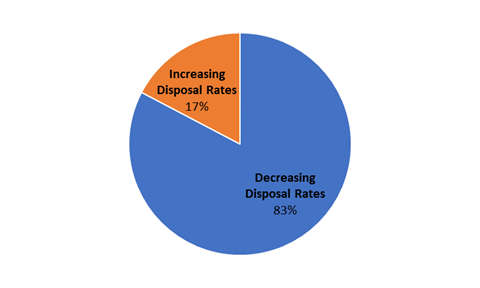 However, the percentages are nearly reversed when considering only years 2012 through 2015.  In other words, the disposal rate has been increasing for the majority of SWMDs during the last four years.  When districts were categorized by population size, the results between the 2005-2015 and 2012-2015 were essentially the same as depicted in Figures 4 and 5. 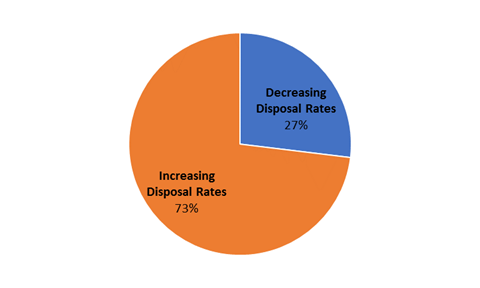 The number of SWMDs categorized by R/C disposal rates using 2015 data is illustrated by Figure 6.  The unusually high disposal rate for three of the four rural SWMDs (greater than 6.0 PPD) can be traced to the improper characterization of oil and gas drilling wastes as residential/commercial wastes at landfills.  A comparison with 2012 data shows that several SWMDs moved from the 4 to 5 PPD disposal rate category into the two higher categories in 2015. 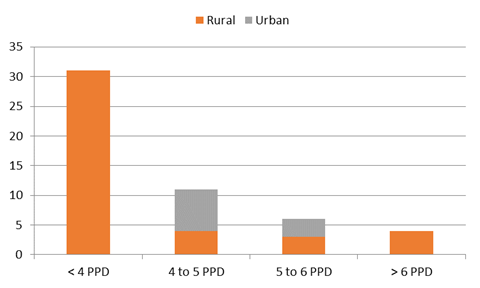 A number of very specific, localized factors may contribute to higher disposal rates within a solid waste district.  One of these, oil and gas drilling wastes, was mentioned above.  Intuitively, one would expect that changes in household income, tourism, and other factors unique to a given region would also affect the disposal rate for the residential/commercial sector.

In 2014, Recycling Today published the results of a study which examined this issue using data from North Carolina.  The author of the study, Chris Giguere, found that, “…for each 1 percent increase in income, waste generation increases by less than 1 percent.”  The author also noted that other studies have found a strong correlation between waste generation and income.  An examination of Ohio’s data seems to show a close relationship between household income and the disposal rate as well.  (See Figure 7.) 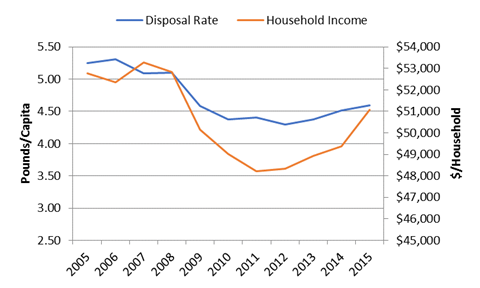 Giguere’s study also found that data describing the construction industry is highly correlated with changes in per capita disposal. As a follow-up, construction employment and R/C disposal rates were plotted together for Ohio, resulting in what appears to be a close relationship.[2]  (See Figure 8.)  The disposal rate appears to be linked to changes in tourism as well.  However, it is possible that changes in tourism are in turn, dependent upon variability of income levels. 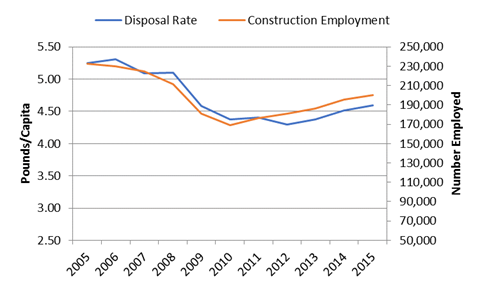 Why should we care about the disposal rate?

Should we care about increases in the disposal rate for the R/C sector?  Even though one could argue that it’s less important than 30 years ago due to the current remaining capacity in Ohio landfills, solid waste districts remain governed by the Ohio Revised Code which includes the requirement, “…reduce the reliance on the use of landfills…”  If this requirement is to continue, it is important that we understand why the disposal rate is increasing, and then determine if policies can be formulated to help reverse the trend.  Returning to the article in Recycling Today, the author found, “…very little correlation between disposal and recycling in the state…When disposal increases 1 percent per capita, recycling only increases 0.2 percent.”  Indeed Ohio’s statewide data seems to agree with this finding.  (See Figure 9.) 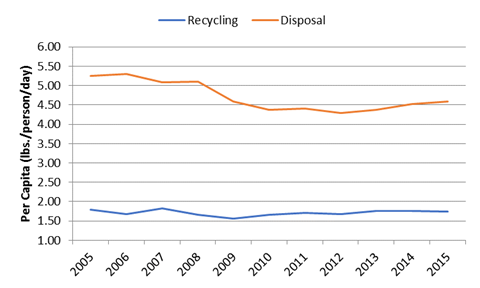 The Recycling Today article concludes that as income increases, policymakers cannot rely on the current recycling programs to accommodate a likely rise in disposal rates without understanding and substantially changing people’s behavior.  Perhaps the Materials Management Advisory Council (MMAC) here in Ohio should look more closely at goals aimed to change people’s behavior.  Another area of focus could be the commercial and institutional waste generators.  Most solid waste professionals would probably agree that the largest gains towards decreasing disposal and increasing recycling are currently to be found in these subsets of the R/C sector, plus multi-family housing.  Every SWMD is obviously a bit different, but the MMAC could begin to consider different goals which would ensure the State and districts move beyond the requirement of providing haulers or processors for a minimum number of designated recyclables in commercial sector.

If you have questions or comments about GT’s article, please contact Mike McCullough at 614-794-3570, Ext. 13 or mmccullough@gtenvironmental.com.

[1] Residual waste landfills are typically facilities owned and operated by the generator of the industrial waste.  Facilities disposing of coal combustion wastes from power plants accept the majority of residual wastes in Ohio.

[2] Please note that this article by GT is not intended to be a rigorous statistical discussion of predictive relationships between the disposal rate and construction employment, tourism, and income.