Ohio EPA and solid waste management districts in Ohio have collected a great deal of disposal data since the passage of House Bill 592 in 1988 and the adoption of the first State Solid Waste Management Plan which followed in 1989. One of the primary requirements in both of these efforts mandated reducing the “…reliance on the use of landfills for management of solid wastes.” [Ohio Revised Code Section 3734.50(A)] What does this disposal data show? Is less waste being managed at landfills now than years ago? Has the amount of solid waste disposal increased, decreased, or remained about the same? These questions as well as other related topics are explored as we take a closer look at Ohio’s disposal data over the last ten years from 2005 through 2014.

Total disposal of solid waste generated in Ohio has decreased from just over 14 million tons in 2005 to slightly less than 13 million tons in 2014.* However, statewide disposal has actually increased since 2012. (See Figure 1.) The increase observed in the last three years can be primarily attributed to an increase in industrial waste sent to landfills. 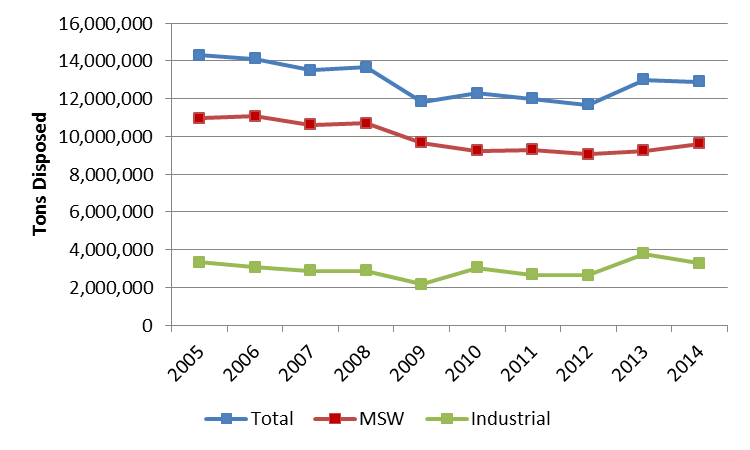 The amount of municipal solid waste (or residential/commercial waste) disposed during the ten-year period has also decreased, with a slight increase since 2012. (See Figure 2.) The disposal rate in pounds per person day (PPD) closely follows the trends for tons disposed. 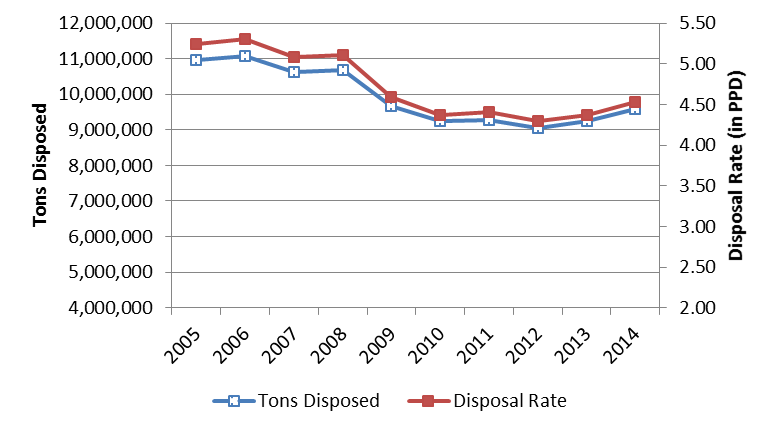 For a number of years, BioCycle Magazine conducted surveys to determine statewide disposal and recycling estimates for all fifty states. In 2008 which was the last year the magazine surveyed each state, Ohio’s statewide disposal rate was lower than most of the surrounding states.** (See Table 1.)

The number of SWMDs in each of the four categories was determined for each year. The results of this exercise are shown in Figure 3. The number of SWMDs included in each category has decreased with the exception of the first category: SWMDs with an MSW disposal rate less than 4.0 PPD. Stated in another way, the data shows that the majority of SWMDs in Ohio have experienced a decrease in the disposal rate since 2005. The tons disposed by SWMDs in the four categories has undergone a shift as well. In 2005, SWMDs in categories 1 and 2 accounted for roughly 30 percent of MSW disposal compared to 76 percent in 2014. 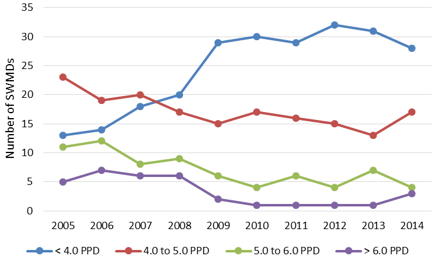 Trends in industrial waste disposal were also examined by placing SWMDs into the following categories:

Figure 4 shows that there has been only slight shifts in the number of SWMDs included within each category. (This categorization includes industrial waste disposed in residual waste landfills.) However, in contrast with MSW disposal, the tons disposed by SWMDs in category 4 for industrial waste increased from 59 percent to nearly 68 percent during the ten-year period. Disposal of coal-combustion wastes from power plants accounted for the greatest amount of this increase. 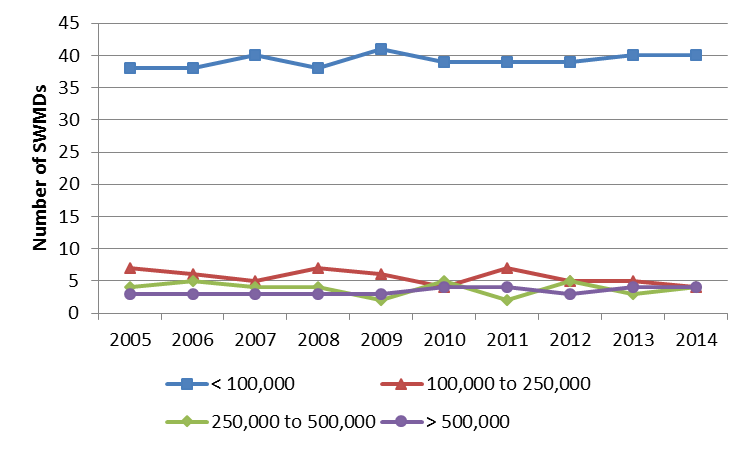 Traditionally, rural areas have been thought to have lower generation rates per capita than urban areas for MSW, or residential/commercial waste. Documented disposal rates for rural areas have also been lower due to more burning of waste and perhaps other management methods more available in rural areas (e.g., composting, reuse, etc.). The five SWMDs having the lowest vs. the highest per capita disposal rates in 2005 were as follows: 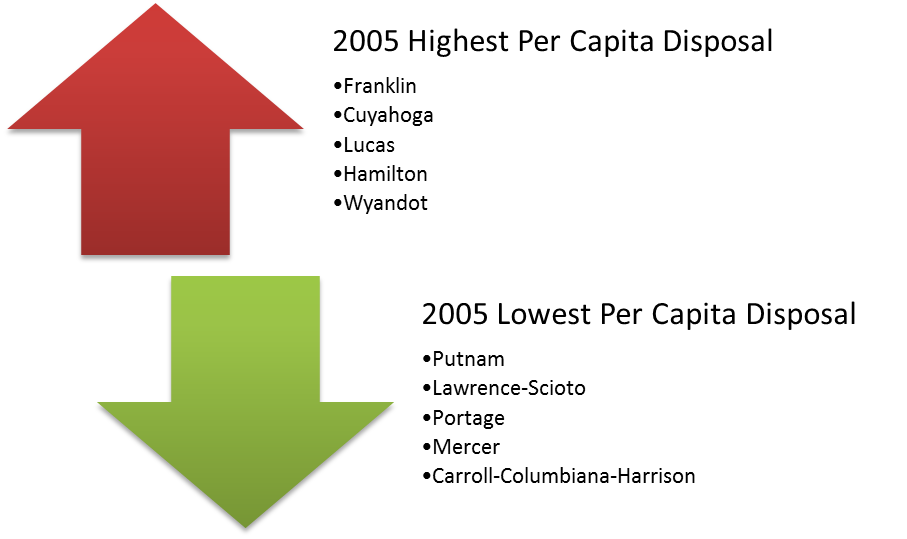 Both of these lists include SWMDs which would be expected, with the exception of perhaps the Wyandot and Portage SWMDs. Wyandot is a mostly rural area which had a high disposal rate, while Portage is a medium-sized county in terms of population, but yet had a low disposal rate in 2005.

In 2014, the five SWMDs having the highest per capita disposal rates is much different than in 2005: 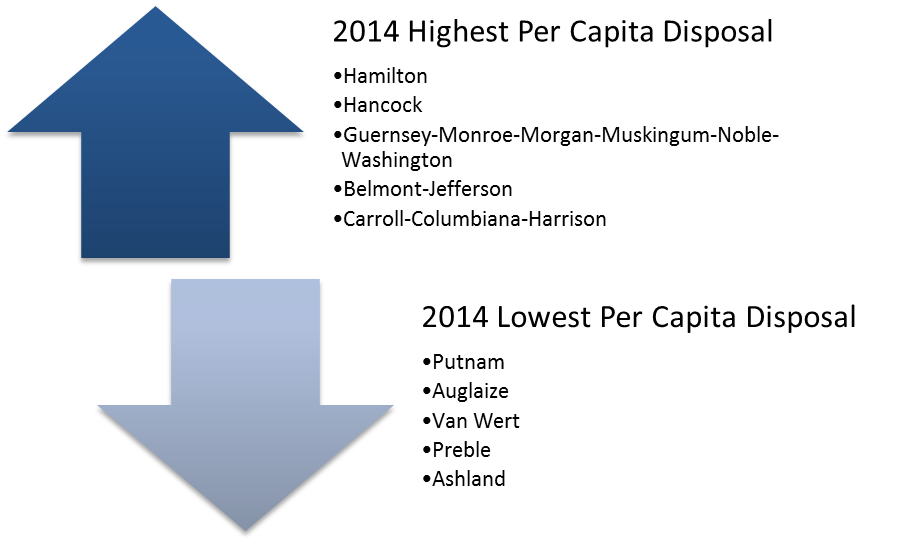 With the exception of the Hamilton SWMD, each of the SWMDs with the highest disposal rates would be expected to have some of the lowest disposal rates as these SWMDs are quite rural in nature. However, wastes from oil and gas drilling companies have largely contributed to the high capita disposal rates in SWMDs such as Belmont-Jefferson, Carroll-Columbiana-Harrison, and Guernsey-Monroe-Morgan-Muskingum-Noble-Washington.***

*Disposal tonnages in this article refers to waste generated in Ohio and sent to landfills in Ohio as well as landfills in surrounding states.

**Although it useful to compare disposal rates among states, it is also important to recognize that not all states use the same methodology for determining total disposal, or the types of materials which are included in MSW and industrial waste. Also, Ohio is believed to have a more accurate data collection system than many other states.

***Landfills in Ohio have been instructed by Ohio EPA to characterize oil and gas drilling wastes as industrial waste. However, at least one landfill in eastern Ohio has been recording this material as MSW.